The primary purpose of a CNC system is to move the machine and to control the peripheral devices according to the control program written in G-code. Practically all CNC systems are able to cope with this main task, and in this regard, all CNC machines are roughly on the same level.

When comparing CNC systems, one must therefore talk about various additional opportunities that are present within the CNC control system. Although these additional features are often optional, their presence allows for increased productivity,  improved accuracy and quality of cutting, reduced machine downtime, improved usability and reduced training requirements for the personnel working on the machine.

This article goes over a number of such advantages and opportunities that are present in myCNC software compared to the other major CNC control systems.

Importing and converting DXF into G-code

myCNC software allows to import simple CAD files in the DXF format and is able to convert them to control programs in G-code. As well as importing the movement trajectory, one can also add the cutting specifications and the reverse movements for the machine by entering the length and the type of the cut (straight or on a curve).

The results of the system working with such an imported DXF file, library parts, or part multiplication are saved as G-code files. Therefore, the myCNC software can be used with third-party CNC control systems to prepare the necessary G-code commands.

Using a variety of different tools

myCNC allows the user to assign different tools to the different layers (in DXF files) or colours (HPGL files). This means that after imporing the file, it will automatically insert all the necessary tool change macros. This also allows to easily use both tools which require tangential cutting capabilities (tangential knife, creasing wheel, etc) along with those that do not (spindle, marker), all in the same job. The tool change macro automatically enables and disables tangential cutting, depending on which tool has been assigned to which layer from the original imported drawing: 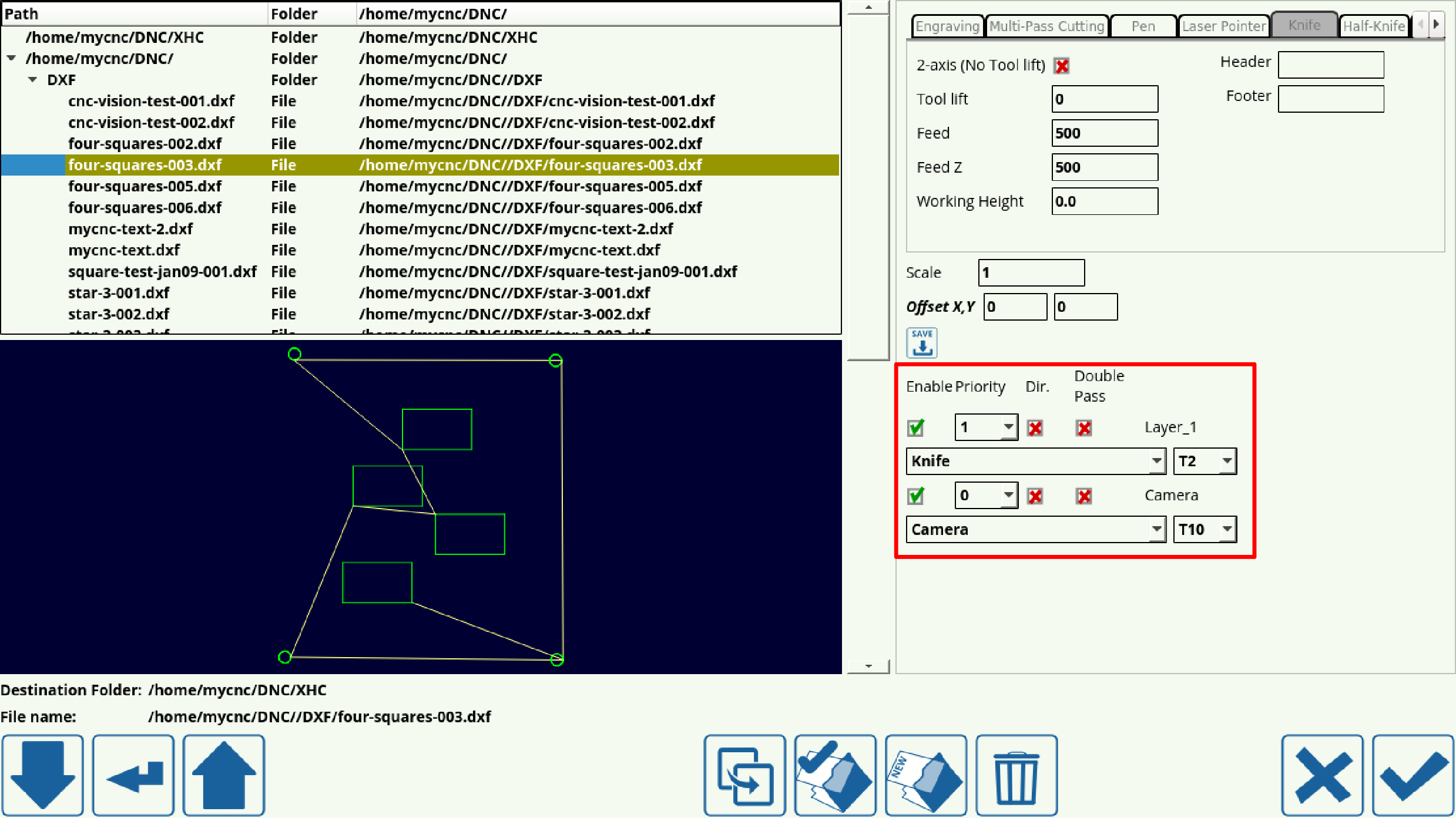 As can be seen in the screenshot above, the Knife and Camera tools have been assigned to the two different layers within the imported DXF file. This provides a simple all-in-one solution, with automatic tool switching applying the tool offsets, tangential knife control, tool priorities and more. Learn more about our DXF import process here. 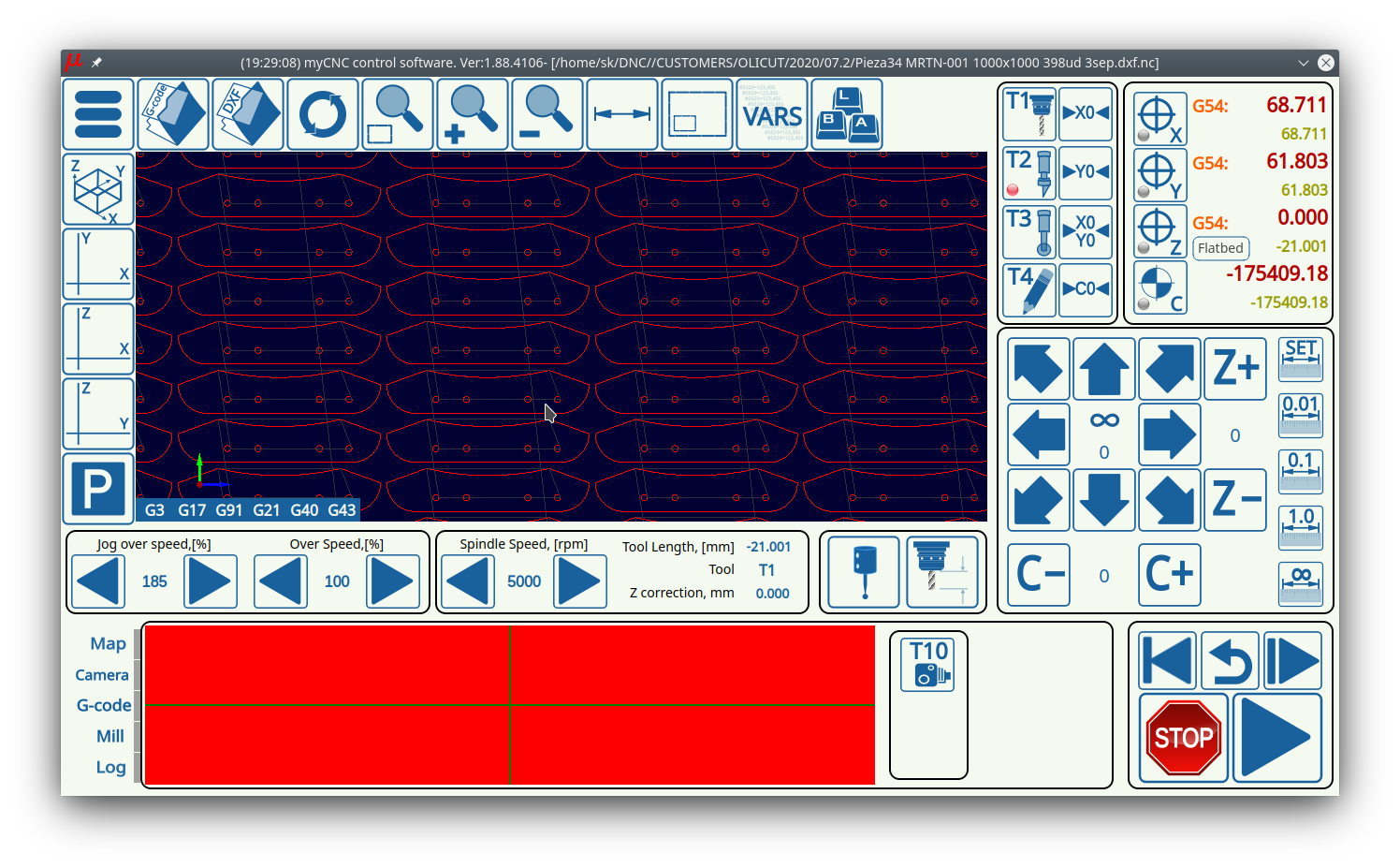 A 2D (or a 2.5D) file such as the one shown above contains both the outer and the inner contours of the part being cut. In certain applications (plasma cutting, tangential knife cutting) it is preferable to have a separate (often lower) speed for the holes that are located inside the main contour. However, a number of CAM programs do not accommodate for this need if they do not have an implementation for two separate speeds.

To solve this issue, myCNC features an Arcs Slow Speed Control settings (Settings > Motion) which allows the user to quickly set up hole cutting speed based on the arc diameter of the hole in question: 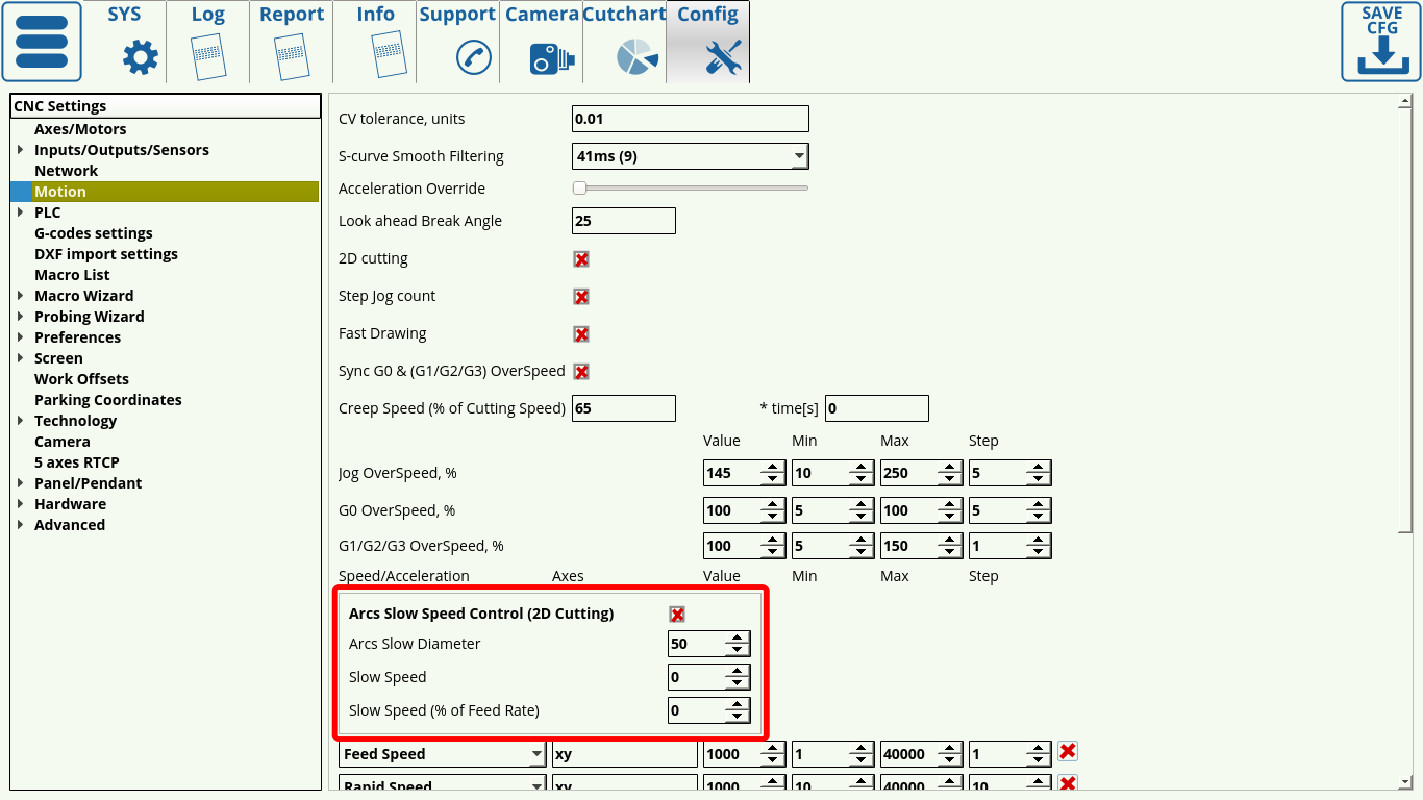 Stopping and resuming the program

Furthermore, after stopping you can manually move the cutter to a position that is convenient for the operator (for example, to inspect the plasma torch and replace the nozzle or an electrode), and then return the cutter to its original stopping point by pressing the “Return” button.

Despite its simplicity, such a function is absent in some major CNC systems that are designed primarily with milling in mind (such as Mach3 or LinuxCNC). 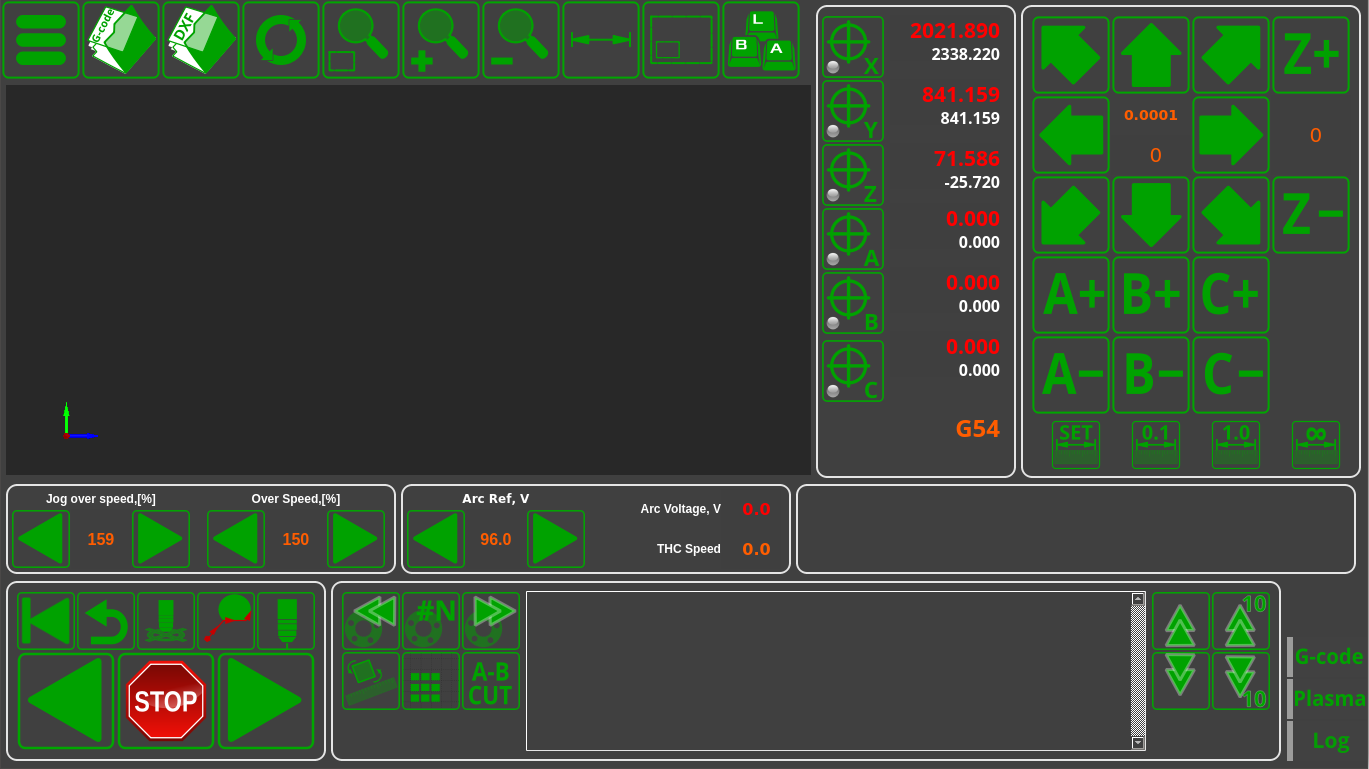 This function is similar to the one described above, however, the program is stopped automatically due to a break in the plasma torch arc. The program can be resumed by pressing the Run button after eliminating the source of the break (by cleaning the plasma torch, replacing the nozzle, etc).

By pressing a button on the remote control or on the screen of the control system, the system is switched to function in simulation mode. This will ignore the start commands for cutting, initial positioning and firing cycles. When launching the control program, the machine will only perform idle movements within the program (movements at the working cutting speed or accelerated movements at the idle stages speed are also possible).

Running the program backwards and forwards

In simulation mode, one can move within the program both forwards and backwards. This is extremely useful in case the operator needs to cut out a part from the few remaining bits of material, and an idle run is necessary to check that the part can fit in the space that remains before the actual cutting starts. 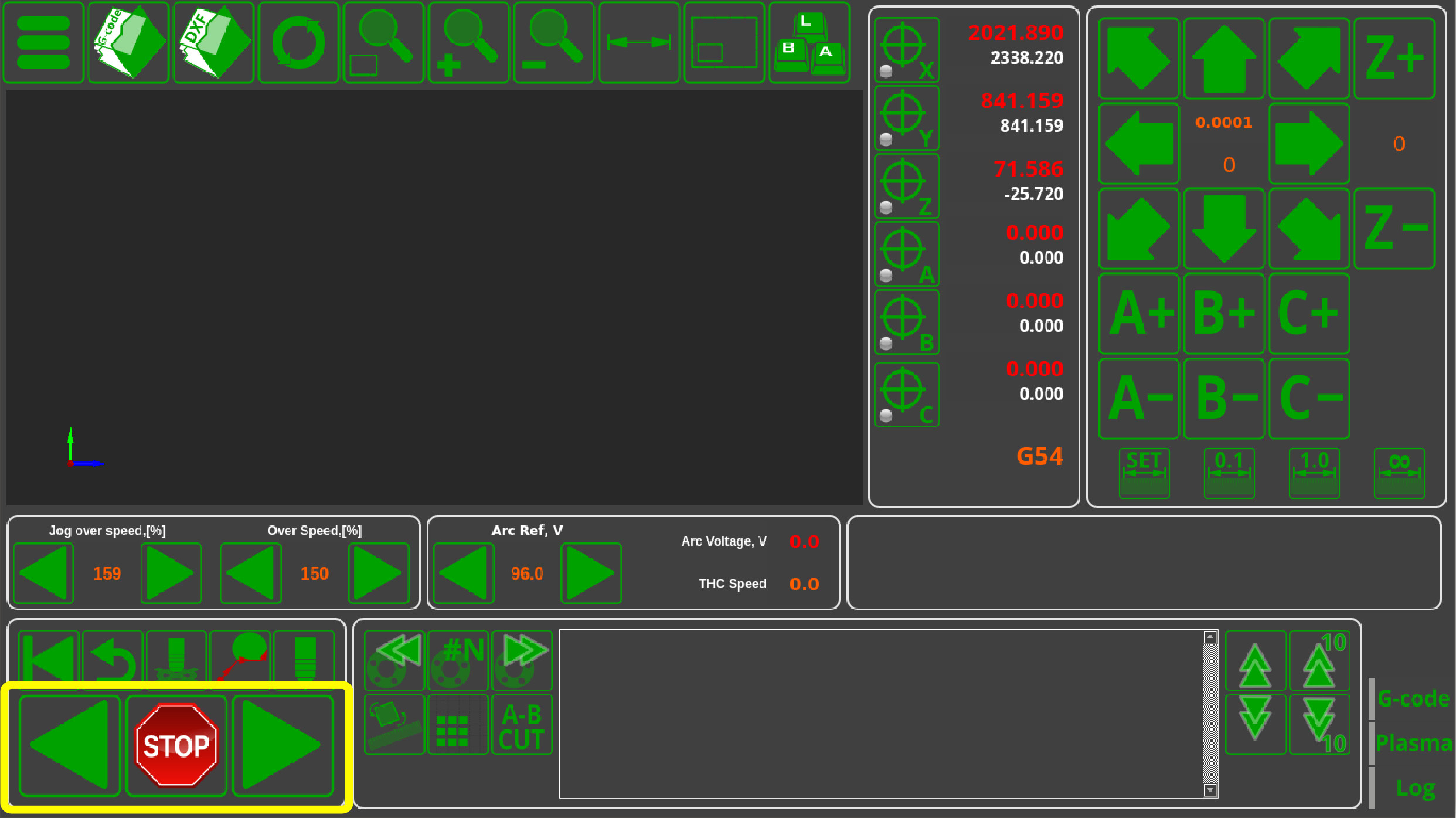 In comparison with the “search by frame number” method employed by traditional CNC systems, this implementation performs significantly better in terms of time spent and ease of operation. 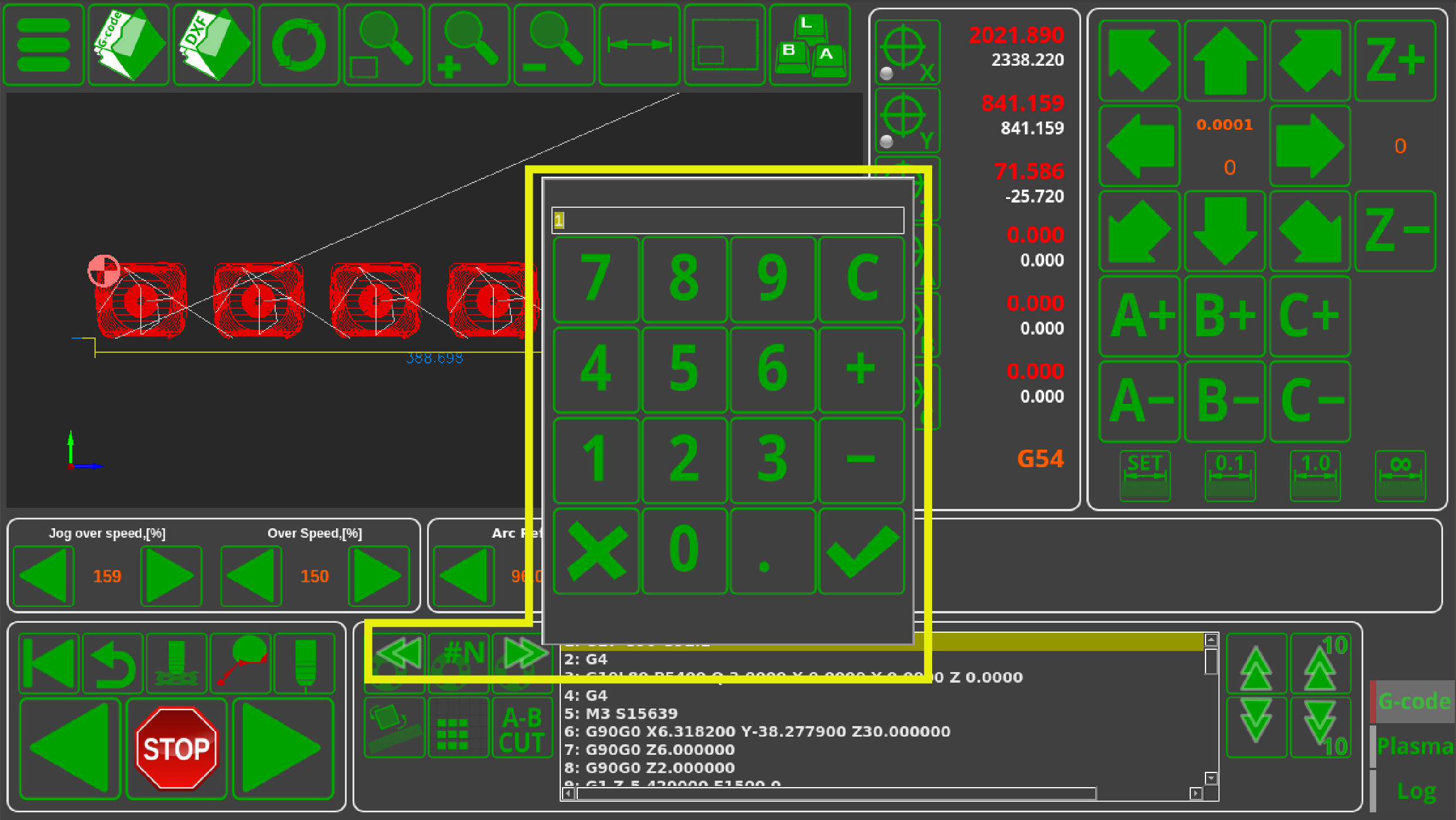 In a few easy clicks, multiples of the same part can be created within the myCNC software, by setting a desired number of parts and the distances between them. For further information on this procedure, please consult the full row and column nesting manual. 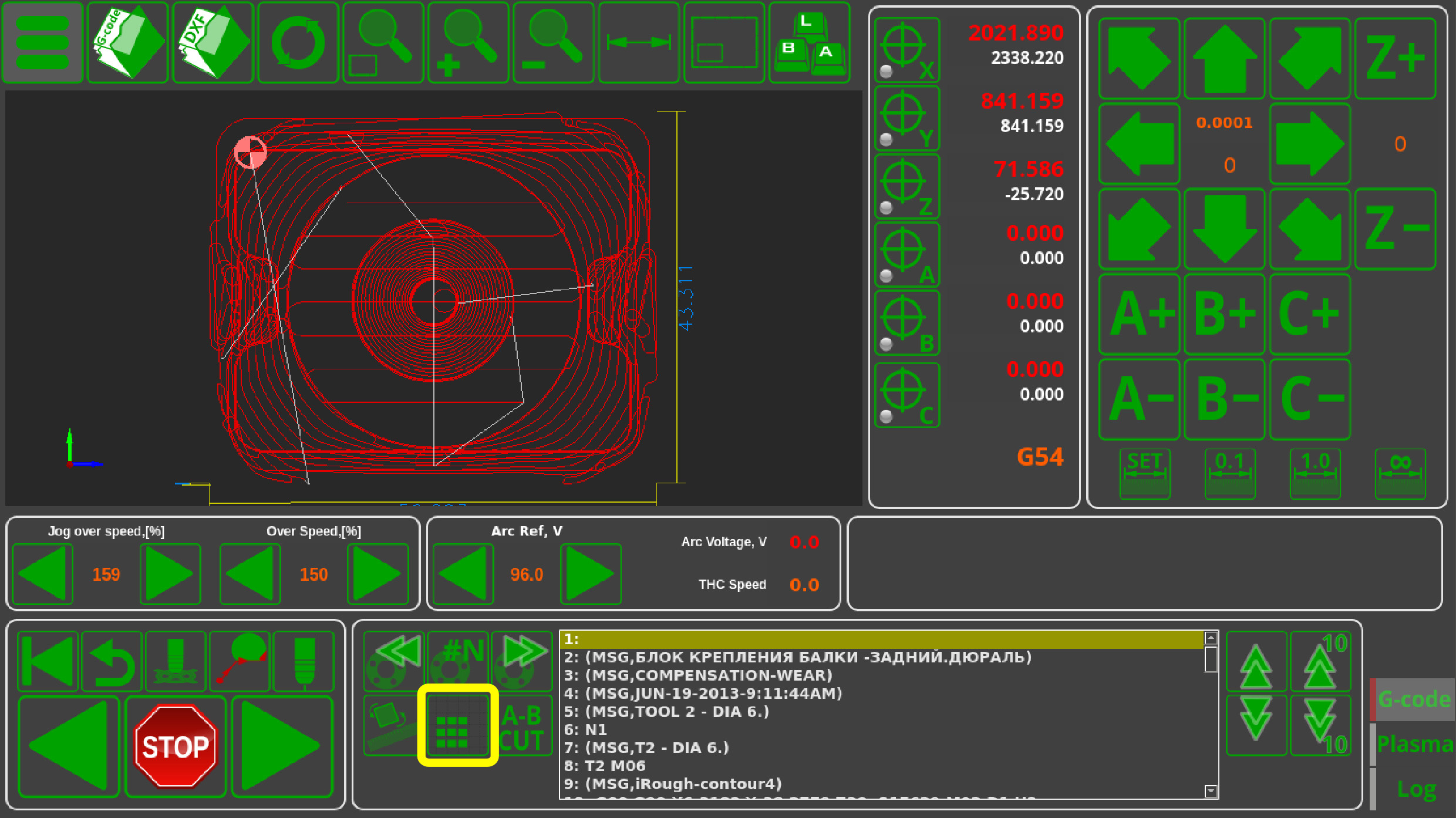 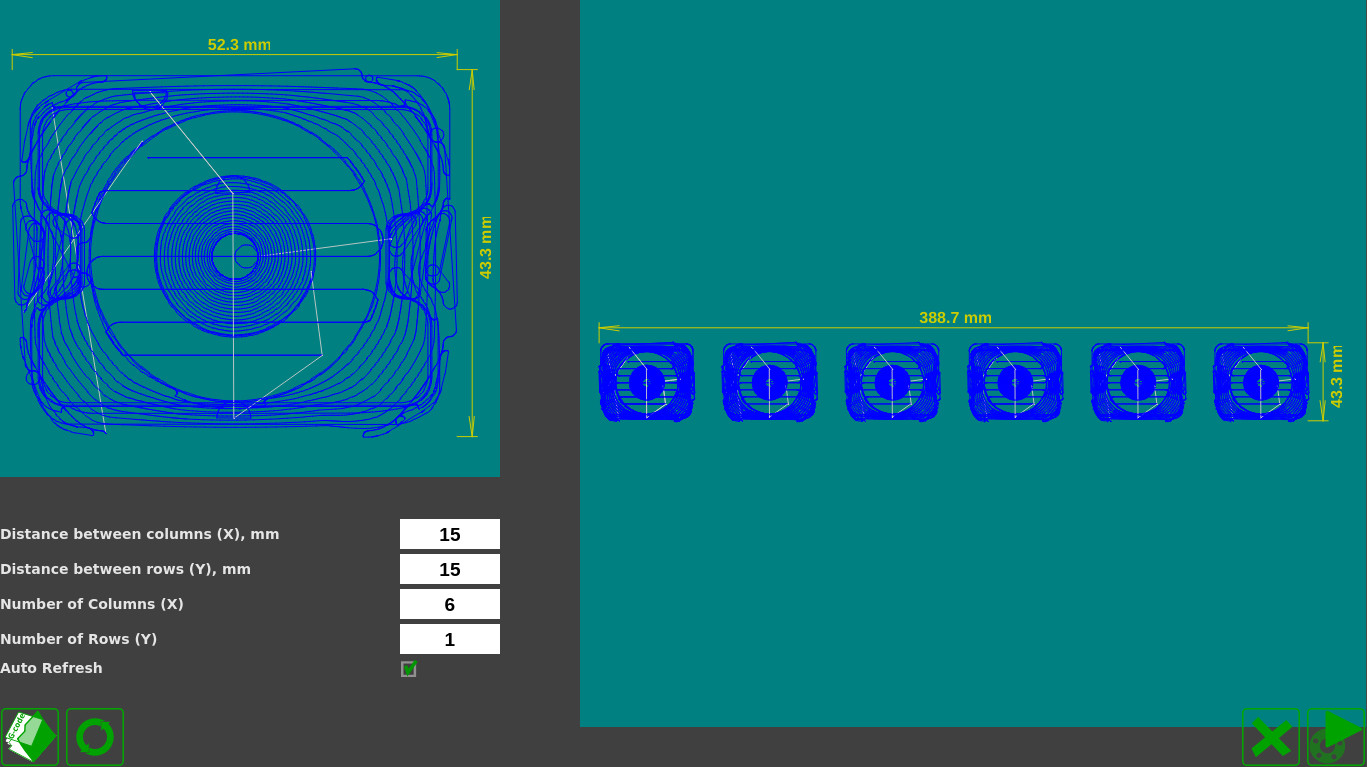 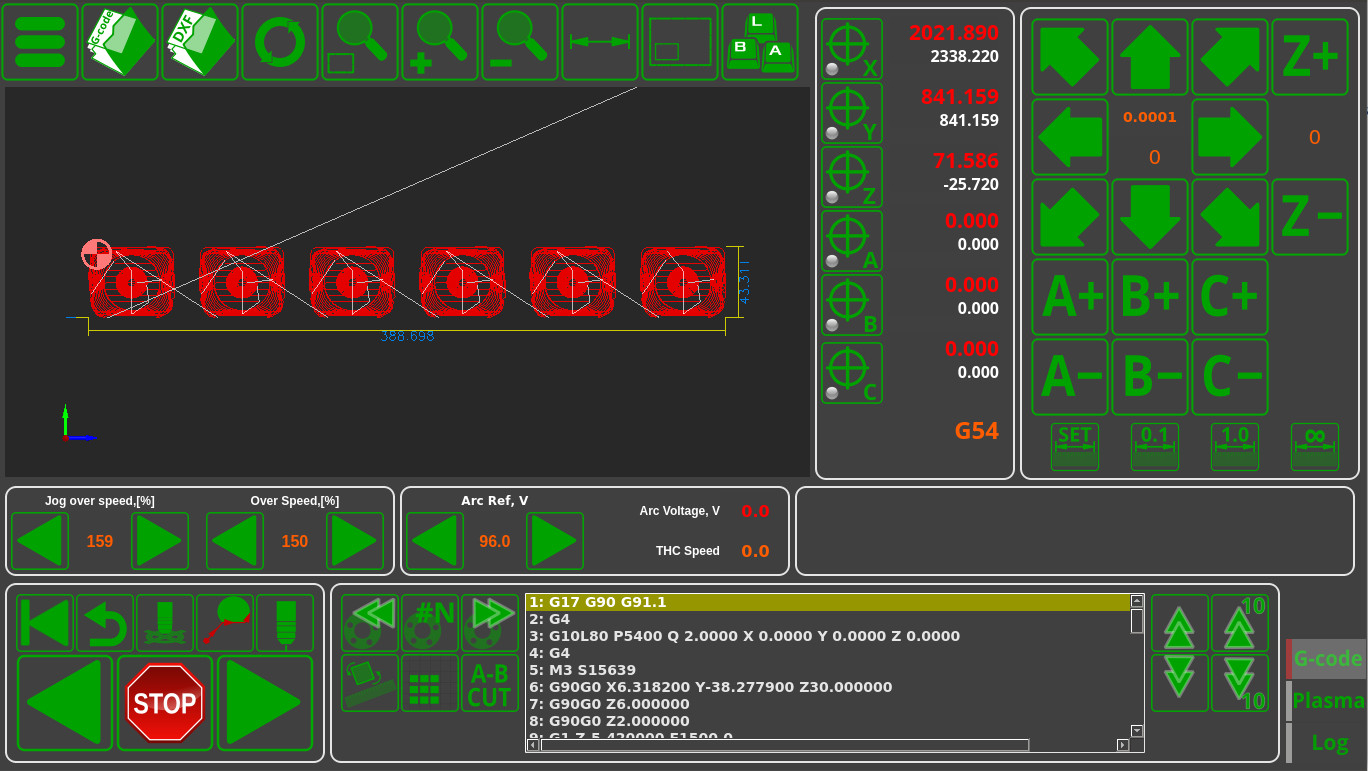 Rotating the CAD file by a specific angle

The control program can be rotated by an angle that is desirable for the operator. This can be done by inputting the value for the rotation angle manually, or by allowing the system to determine this value using two specified points. Mirror rotation around the OX, OY and XY (x=y) axes is also possible. 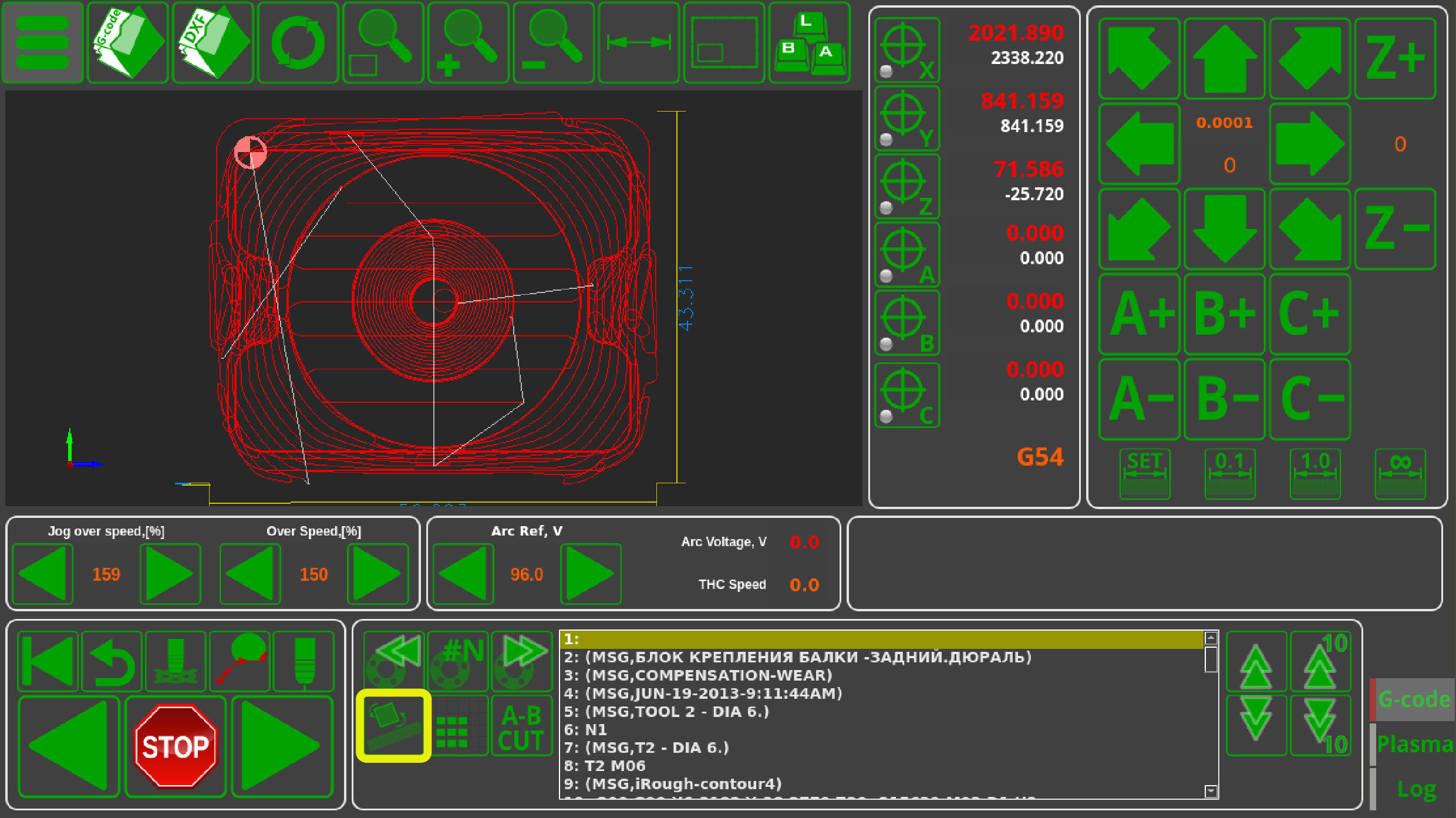 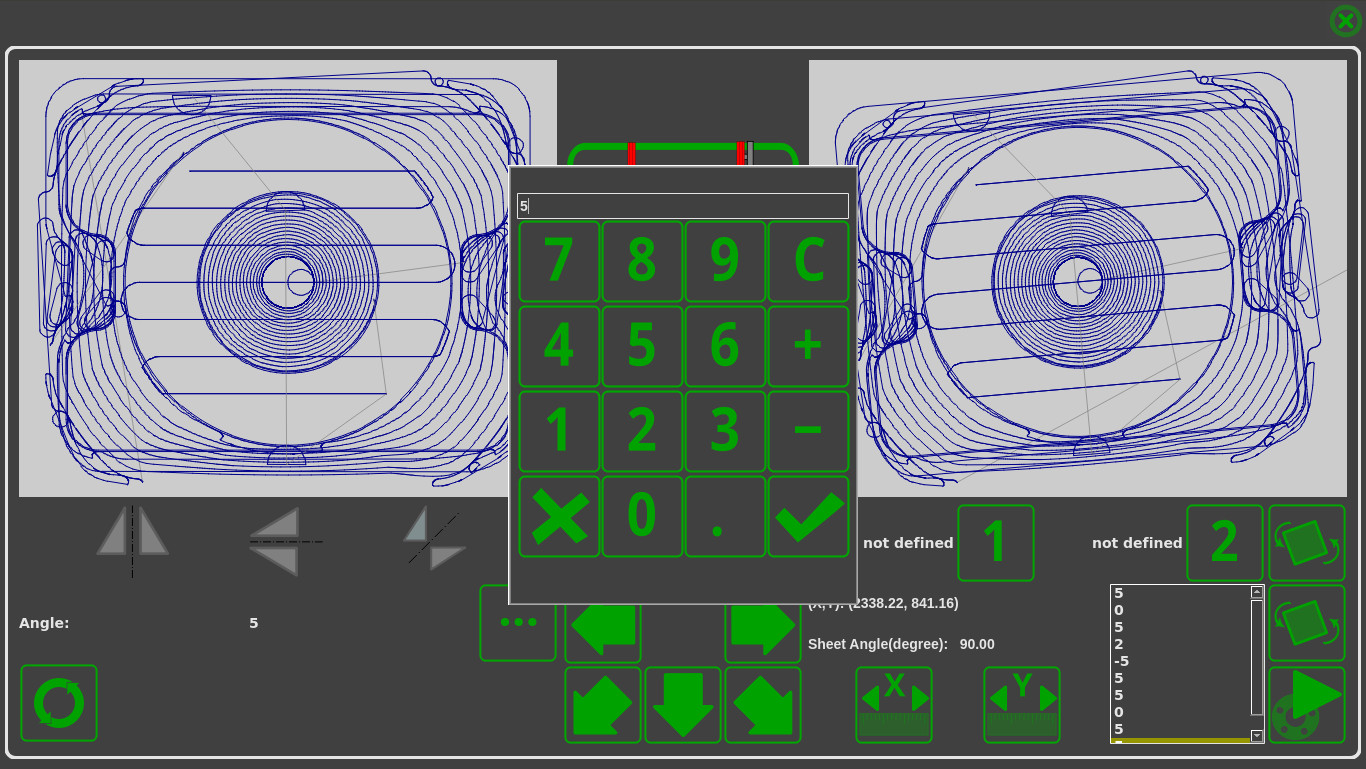 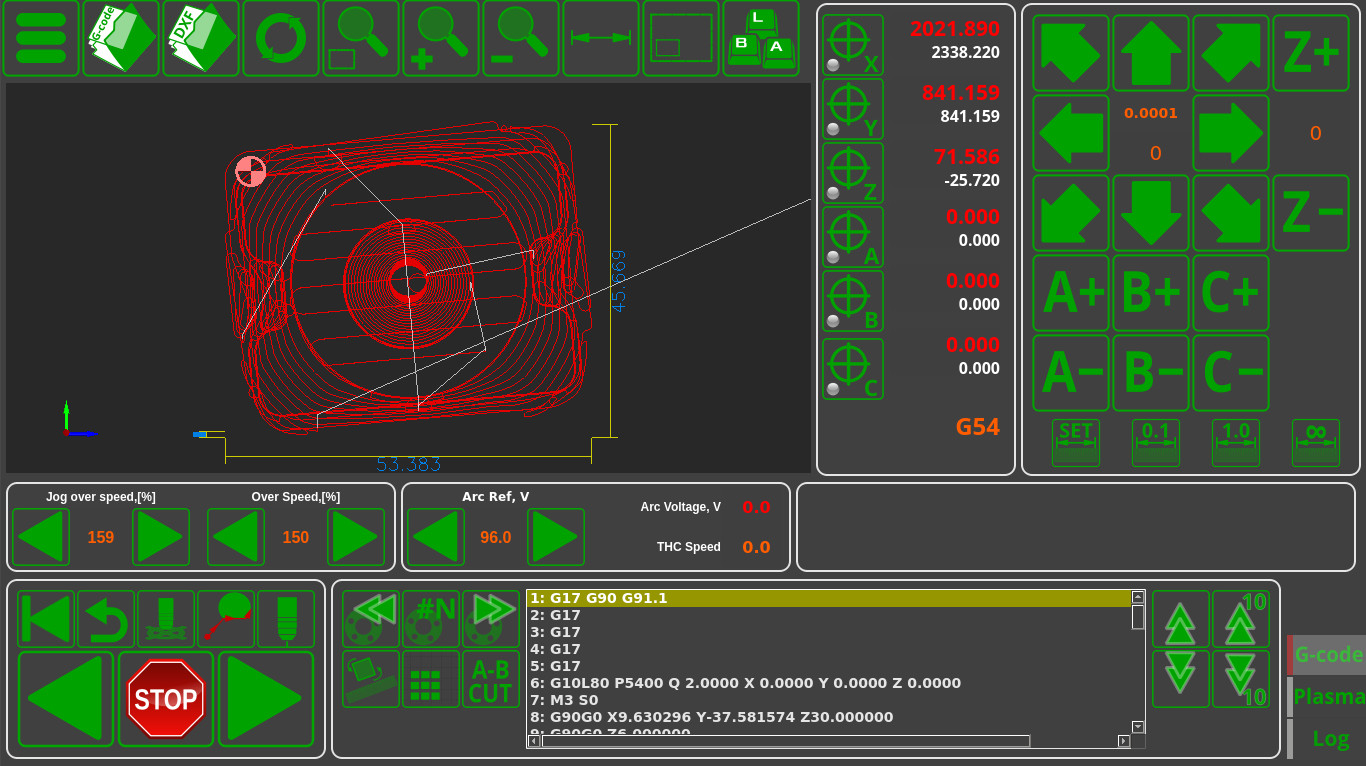 The rotation function is highly useful in situations like:

Cutting from the edge of the sheet

In case the cutting is done on a thick sheet, it can be hard to perform the initial cut in order to punch through the material for the first time. In this case, the edge cutting function can be used, since the breakthrough process is a lot less demanding if performed on the edge of the sheet. In this mode, a spot for the cut will be selected, the part itself is selected through scrolling to the necessary cutting command (as shown above), after which the operator can move the machine from the cutting position to the closest point at the edge of the material sheet and turn on the edge cutting mode.

This will automatically start the initial contact and ignition procedure, after which the machine will move directly to its actual cutting position upon reaching which it will continue to execute the cutting program.

myCNC comes with an included library of more than 70 default parts which can be altered and modified according to the users' specifications. The parameters that can be changed are:

Using the software functions provided, the operator can create a simple cutting control program straight from the CNC machine in a couple of minutes, without having to consult the technology department or having to use expensive CAM software. In certain cases, the user can forego using CAM software entirely, by simply using the bundled-in functions of the myCNC parts library. 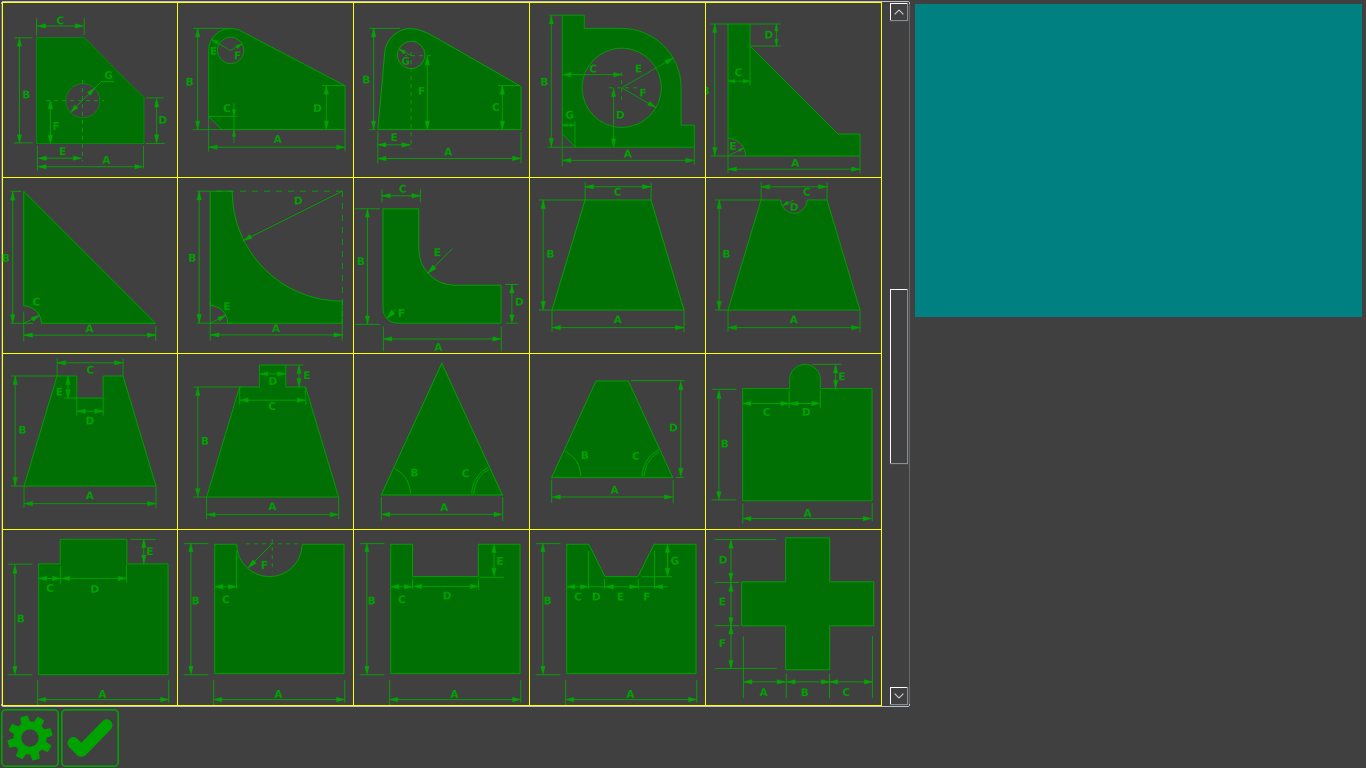 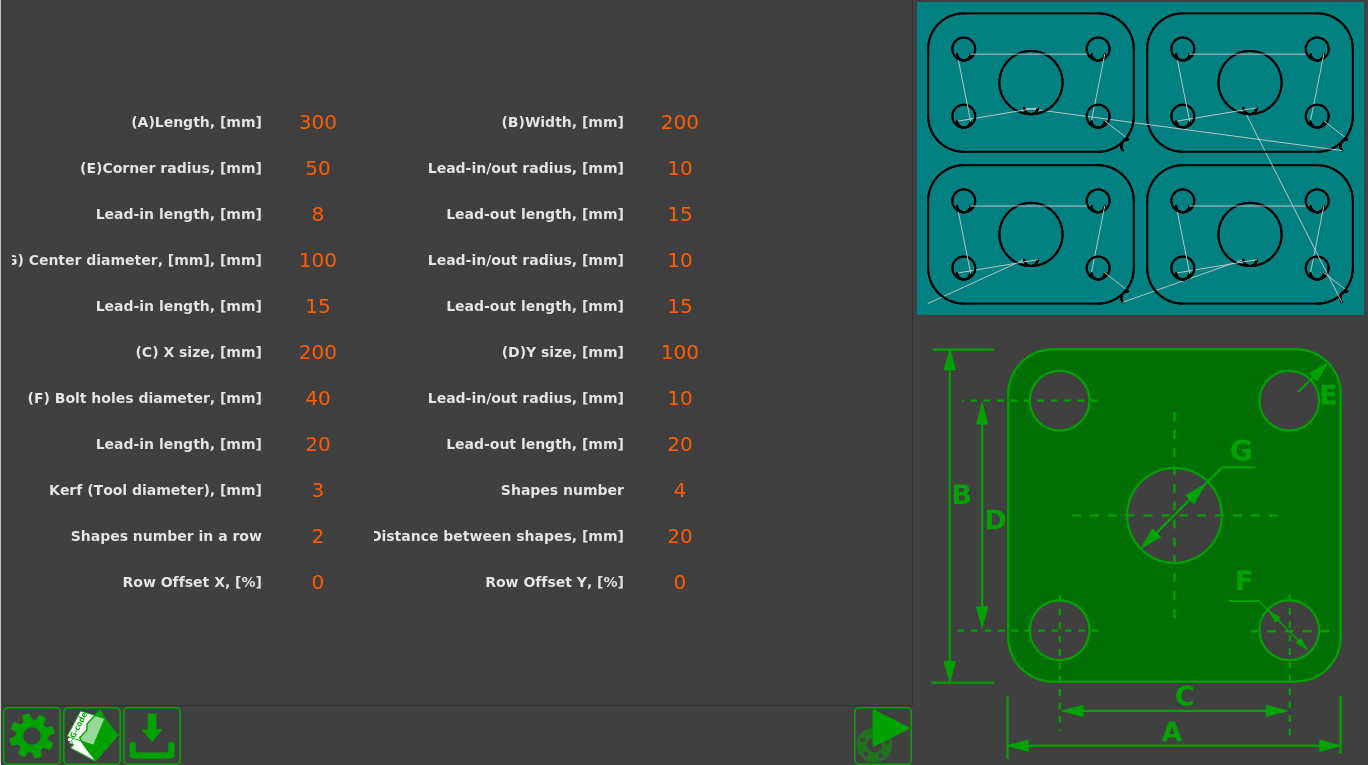 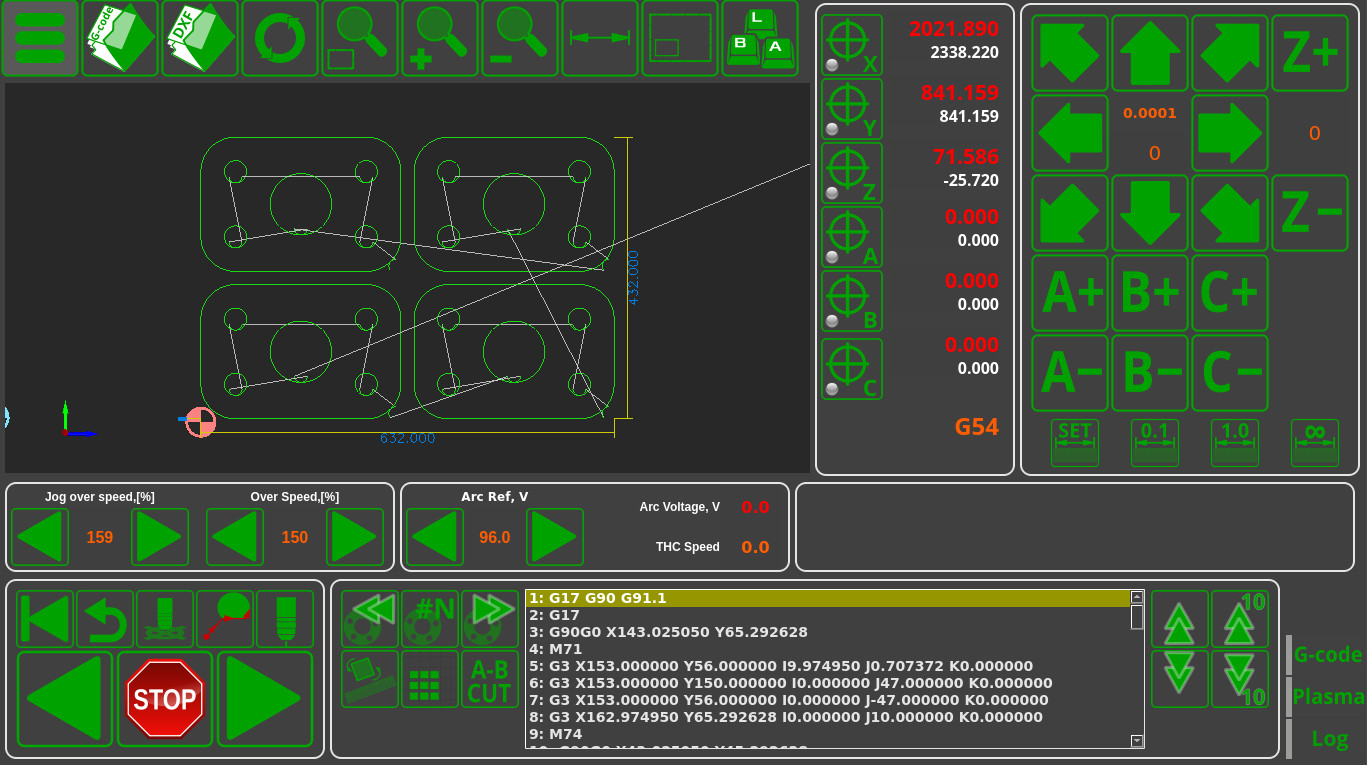 myCNC software makes it possible to create cut charts for different types of plasma cutting sources. The list of parameters that the operator indicates when loading a module from a table can be configured. Usually the following parameters are considered:

When loading the control system, the following parameters will be loaded from the cut charts (provided they have been inputted) 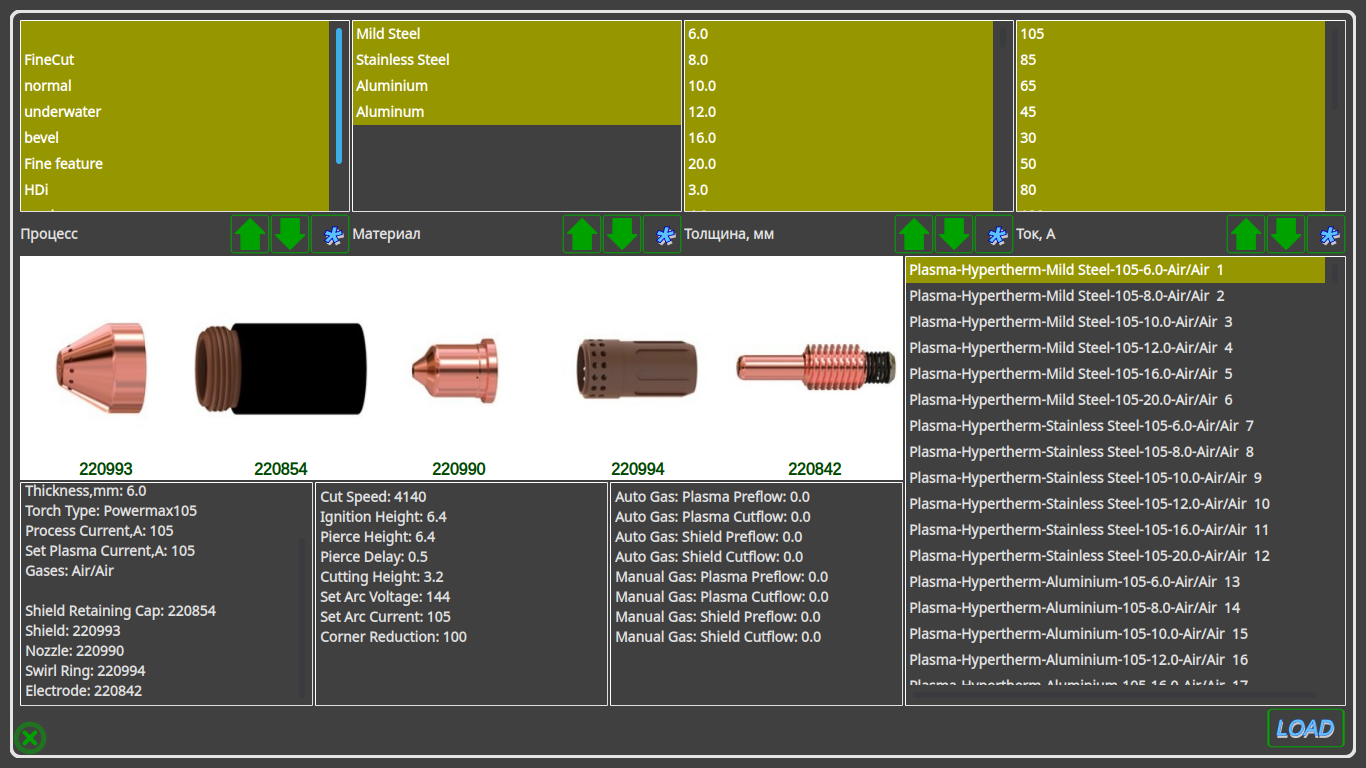 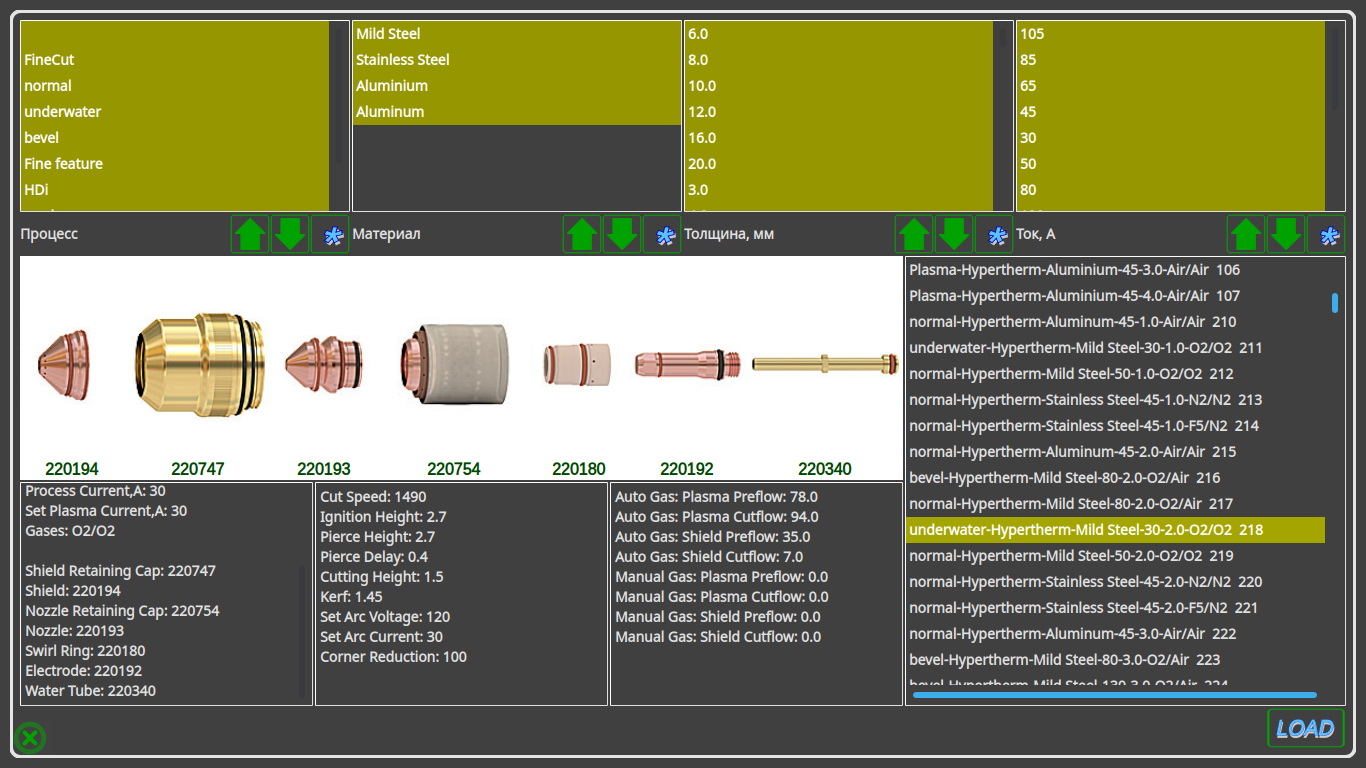 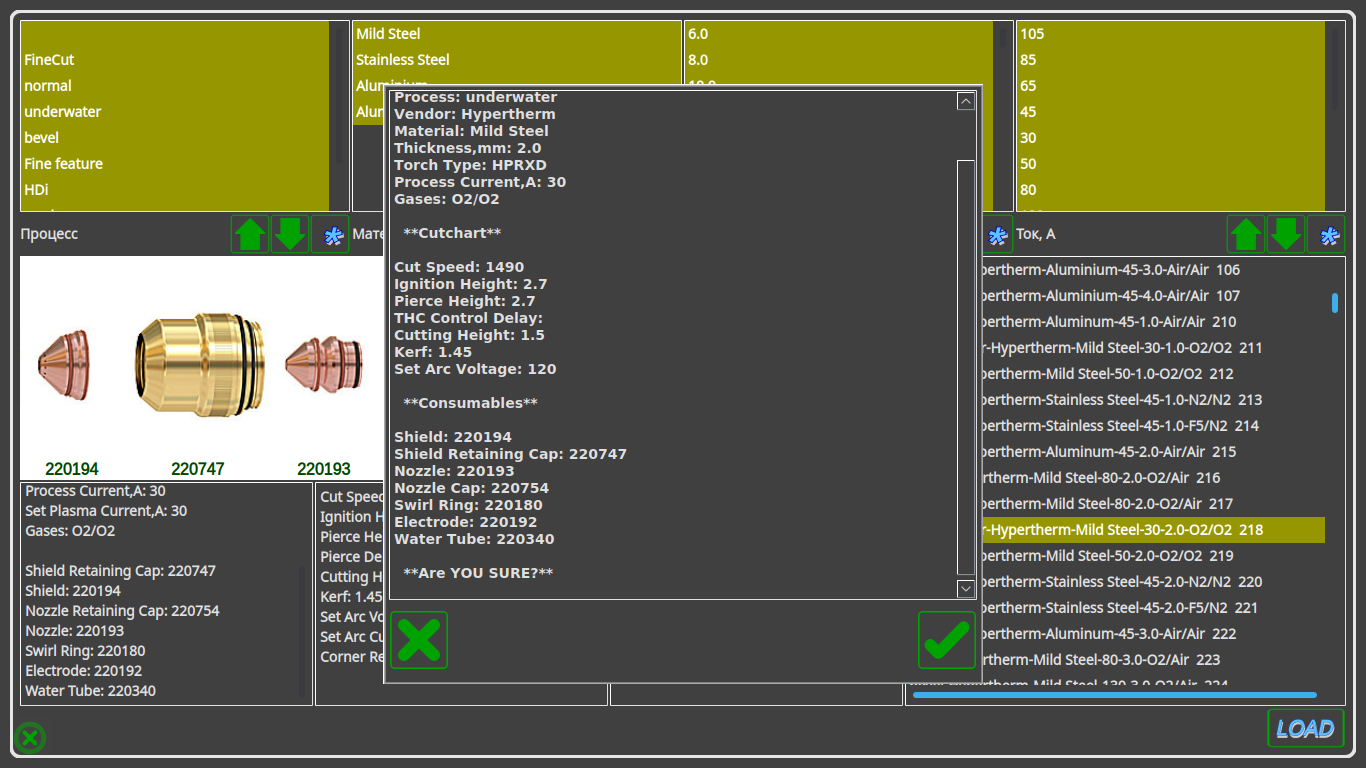 Unlike many CNC systems, myCNC has full integration of the THC (torch height control) system. This brings along the following benefits: